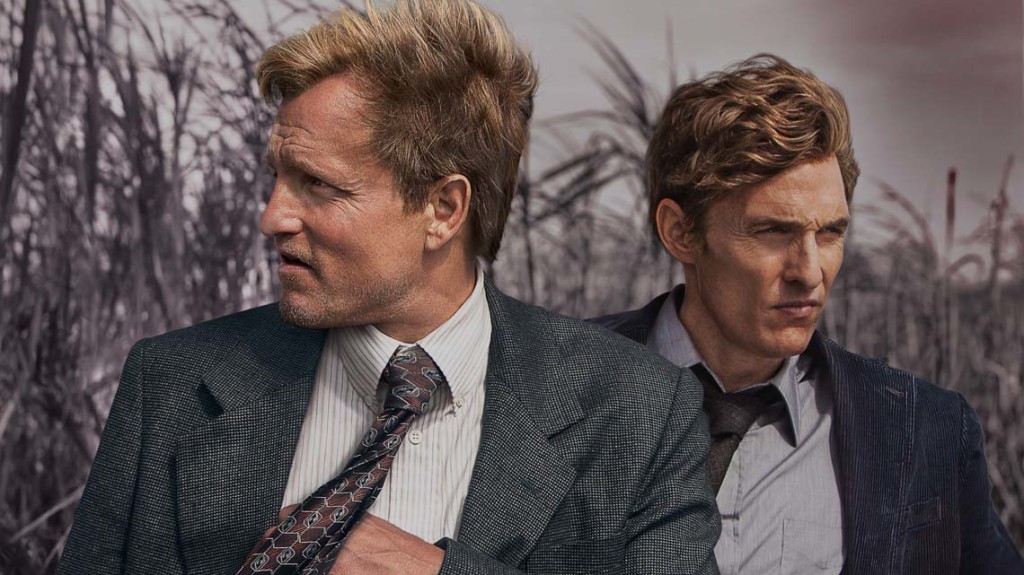 The following quote is splashed across a tote I once received from a bookshop: ‘I think television is very educating. Every time someone turns on a set, I go into another room and read a book.’ – Groucho Marx.

Each time I fill the bag with groceries, Marx’s quote fills me with rage. I see the irony in his comment, but it’s more a weak punch aimed at an easy target than a witty punch line because this high-low, education-entertainment rivalry continues to circulate in earnest.

So one of many reasons I’m loving HBO’s new crime drama True Detective is because it flips the bird at this cultural distinction between TV, philosophy and literature with the same gusto as its protagonists flipped off each other in this week’s ‘break-up’ episode.

The show is a critical darling, surrounded by multifarious conjecture and debate – it gives viewers so much to read and write and think about.  When Robert W. Chambers’ The King in Yellow was referenced in an early episode, the 1895 book became ‘a bestseller overnight’. True Detective is inspiring mass speculation and vigorous research in droves (and requisite memes, of course).

True Detective follows detectives Rustin Cohle (Matthew McConaughey) and Martin Hart (Woody Harrelson) and their involvement in interlinking homicide investigations – one set in 2013, the other when they were partners in 1995. The meta-narrative unfolds from numerous questionable perspectives and fluctuating timelines; mesmerised, viewers are given both a little and a lot to work with.

Keenly assisted by the pulsating performances from McConaughey and Harrelson, True Detective slowly seduced me (after all, this is the ‘McConaissance’). This inaugural anthology series is striking for many reasons, predominantly its style, a result of True Detective’s distinctive creative process.

Prone to pontificating, there are just too many wonderfully poetic monologues and effective (at times comical) throwaway lines from Rust – particularly via the majesty of McConaughey’s delivery – to even begin to offer quotes. Where characters see Rust’s ‘soul looking … through [his] eyes’, his polar Marty rolls them. The enigmatic ‘deep-thinker’ of the duo, Rust uses his loquacious talents to probe criminals and the universe. At times Rust’s words may require a second contemplative viewing or further research – a concept at the very heart of True Detective.

It’s no surprise that True Detective’s writer/creator Pizzolatto is a published author who previously taught literature at various universities in the States. As in his characters’ lives, Pizzolatto’s past implicitly haunts the show: True Detective’s narrative and dialogue is saturated with literary, mythological and philosophical references from H.P. Lovecraft to Nietzsche and recently Medea. It’s also accessible through the compilation of True Detective reading lists and interviews in which Pizzolatto offers relevant resources to satiate a viewer’s educational appetite.

Some have decried such intertextual ‘snobbishness’ has left them feeling ‘really, really dumb’. I’d argue that True Detective is encouraging and educating viewers rather than shaming them; the referential mystery is as much part of the show’s allure as the plot (if you want it to be).

Television as ‘idiot box’ has long slipped out of the vernacular. We’re doing further reading to read further into shows and if we don’t, that doesn’t make the form any less valuable. Whether a show lends itself to literature or not, television does not belong in a cultural void but unlike its cousin film, arguments for television’s artistic or academic worth remain in their infancy.

We invited the TV to sit beside our bookshelves in our homes years ago. I’m glad the likes of True Detective are finally compelling viewers to acknowledge that they indeed sit together well.