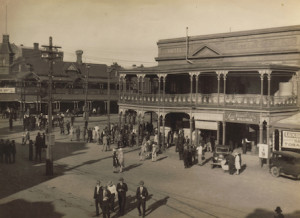 For the first KYD No. 16 teaser James Purtill examines the politics of place and belonging in the heart of gold mining country, Kalgoorlie.

You will find Kalgoorlie six hours east of Perth, on a drive past rained-on war machinery and clean swept service stations, through the West Australian Wheatbelt and the Greater Western Woodlands. I moved there last year, and began working as a journalist at the town’s newspaper, the Kalgoorlie Miner. I had grown up in Perth and seen much of Western Australia, but I knew little about Kalgoorlie before I arrived – far from the coast, it had a reputation as an outback desperado town, full of eccentrics in the ‘mining game’. That was one reputation – the other was of a grim and utilitarian place, dominated by the enormous gold mine at its centre. These were contrasting versions not only of the town, but also of the state, which was now in the second decade of an uninterrupted mining boom.

I did not choose Kalgoorlie. I had returned from several years overseas working as a reporter, penniless and restless and no longer feeling at home in my hometown. Kalgoorlie would provide a salary, and as a transient mining town there would be no obligation to make it my home. It would be a chance to reflect on where I had been, and where I was going.

James Purtill lives in Sydney. He works in radio and TV and does some freelancing on the side.