Making and taking: striking a balance between consumption and creation 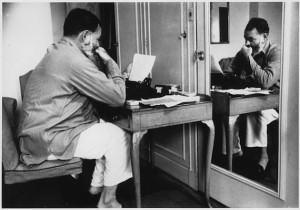 Writers at Work is a rich source of visual metaphors (pictured: Ernest Hemingway).

When I write, I feel as though I’m an imposter, painfully aware of every foundational, canonical text that’s somehow slipped me by: I haven’t read Umberto Eco; I haven’t read Beckett! Then, when I do read, I feel as though I’m wasting time that might be better spent writing: I mightn’t have read Beckett, but I do know he’d already published a pretty amazing essay at the unripe age of 23.

It’s exhausting, but I don’t believe I’m alone. I know I’m not. The relationship between creativity and consumption has always been fraught, and technological shifts haven’t made any of this more straightforward. As it gets easier to make, it gets easier to consume, and we’re continuously forced to reassess what constitutes the right balance between making and taking.

We live in a culture that values making (see Smashwords, Etsy, NaNoWriMo, Kickstarter, and on and on), but our twenty-first century economics of attention don’t really add up. Most of us strive, when we create, for some modicum of ‘internet fame’ (believing that ‘internet fame’ is eminently more achievable than ‘IRL fame’), but we have to know we can’t all be ‘internet famous’. We have to know we can’t all find takers for the cultural products we make. As Frank Chimero has noted, even those who can build an online fanbase rarely figure out how to leverage that attention into a living wage (‘a YouTube music video with 400k views would net the artist about $25’). And those of us without a fanbase seem to be falling, in greater and greater numbers, for Cory Doctorow’s contention that ‘the big problem isn’t piracy, it’s obscurity’, which encourages us to give more and more of what we make away for free in order to lift ourselves out of obscurity, in the process collectively devaluing our work and the work of others.

We’re so desperate to be read, watched, listened to, that we’ll willingly drop the value of what we make to zero… and we often still find ourselves struggling to find willing readers, watchers, and listeners. Ironically, the reason we probably can’t find an audience for our work is that we’re not actually very interested in engaging with the work of others like us. We’ll write short stories or poems or paint pictures but then spend our free time binge-watching reality TV shows or blockbuster movies or Nintendo games–we’re consuming as much as we create, certainly, but if we’re not consuming the same kinds of stuff as what we’re making, we end up with gluts of certain kinds of work that will never be enjoyed. As creators, we need to be smarter about where we direct our attention as consumers if we want to ensure we end up with an audience for the work we most enjoy making.

Over at Island, editor Matthew Lamb recently introduced a policy in which the magazine will only publish submissions from subscribers. There’s something a little ridiculous about the idea that anybody would want to have their work published in a journal they don’t even want to read, but that’s what happens when the maker-taker balance tips out of equilibrium. The more I think about Lamb’s approach, the more I appreciate it: if you want to make, you need to take; if you want an audience for your work, you need to be willing to engage with the work of others on your level. If you find the idea of having to read stories in order to have your own story published a little distasteful, you’ll soon find yourself facing a terrifying question: would you even want to consume the work you’re creating? (If you wouldn’t, the only rational reaction would be to stop making it, or at least stop trying to get it published!)

Lately, I’ve been trying to identify where things have most been out of alignment. I’m reading more in general and watching less terrible American sitcoms (though I can’t cut them out completely! It’s a sickness!). I’m focusing on more actively seeking out work written by those I know, or taking recommendations from Australian booksellers with a vested interest in supporting local writers, instead of relying on Amazon’s indifferent recommendation robots. In short: I’m trying to consume more thoughtfully and creatively.

On Twitter, Ryan O’Neill recently suggested we perhaps need ‘Less Creative Writing and more Creative Reading classes’. He might be right, but for now, we can teach ourselves. We can try our best to remember that if we want to make, we need to first figure out how, and what, to take.