The adult vs children’s lit debate: an interview with Morris Gleitzman 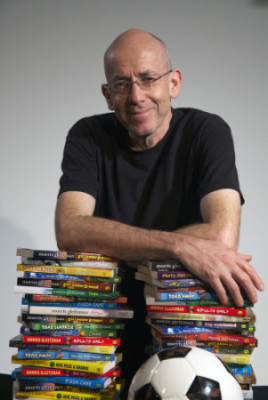 There’s been much debate in the world of young adult literature after children’s author/illustrator Shoo Rayner posted a blog questioning the decision to award author Patrick Ness the Carnegie Medal (the British Children’s Book Award). The post was ‘Can children have their prize back please?’ and it caused a mild (but dignified) Twitter storm between Ness and Rayner, which everyone has since weighed in on.

You can read the thought-provoking Twitter discussion between the two authors, but to summarize, Rayner was suggesting that Patrick Ness didn’t really qualify to win his first Children’s Book Award in 2011, because his young adult book (Monsters of Men, Walker Books) was decidedly adult and not for children.

The conversation has since widened, and focussed on how adult and YA literature has displaced children’s lit in recent years. It’s an interesting accusation, but by no means a new debate.

Beloved Australian children’s author Morris Gleitzman spoke of a perceived stigmatism in writing for children at last year’s Melbourne Writers Festival (MWF). And at the Centre for Youth Literature’s ‘Reading Matters’ conference this year, Gleitzman wanted it known that he was a children’s author amidst YA author panellists.

I recently spoke to Mr Gleitzman about renewed interest in the young adult vs children’s lit debate:

‘A lot of it is about labelling and categorizing that is not directly to do with the primal experience of reading,’ he said, ‘and the primal relationship between readers and books. It’s more an organizational, marketing, book-selling conceptual sort of thing.’

I mention the stigmatism he pin-pointed at MWF 2012, this belief that children’s is a lesser literature because it’s not for adults.

‘I’ve lost count of the number of times at literary festivals, after a couple of glasses of wine, people who write fiction for adults (sometimes very successfully, and at a level of high cultural status) will say something like “Now I’ve got grandchildren, I’m thinking I should write a few books . . . I’m very busy, so I’ll probably just have to knock a few out in my summer holidays.”And there’s some very erroneous notion there of course, that it’s a little hobby, literature-lite.

I developed a thick skin a long time ago. So if I get a sense of condescension from the adult culture towards kid’s books, I take it as a useful reminder of one of my reasons for doing this, and one of my areas of responsibility to young readers, which is to give them stories that are absolutely free of condescension.’

Indeed, young adult literature has become as mainstream as adult literature (if not more so, with the box-office success of Hunger Games and Twilight). Does this leave children’s lit out in the cold? It seems that people are keen to put away childish things and turn to adult, new adult and young adult things instead. Even the children’s/YA Harry Potter series has been marketed more grown-up friendly.

‘Our culture sends so many subtle messages suggesting that there is something better about adulthood. There is something admirable, sophisticated, mature, capable et cetera about adulthood. It’s pretty rare to come through childhood without having some experience of shame, if only because children have to grow up in a world where adult things are valued so much more. The adults are in the majority, and it becomes a self-fulfilling cycle, that every generation of children gets the message early that the thing to be is an adult. A fall out of that is a culture with an unexamined set of assumptions that anything to do with kids and childhood is a training-wheels version of life.

When I talk to adults about children…the adults often make the mistake of assuming that because children are physically smaller, that everything that goes on in their inner worlds is conventionally smaller. And of course, those who remember being 7 or 9 or 12, remember that our feelings and our hopes and dreams and thoughts are as huge at that age as they are at any stage later in life.’

Of course, Morris Gleitzman is one children’s author who has never shied away from examining the adult world through the questioning eyes of a child. This is an author who has written children’s books about asylum seekers, the Holocaust and religious zealots. He doesn’t recoil from the tough stuff, and though he writes for children, he doesn’t write childish things.

‘Kids deserve as high or rich a form of literature as any adult does. It’s going to be different, and different stories told in different ways. But they should aspire to no less than the finest of what adult literature can achieve.’