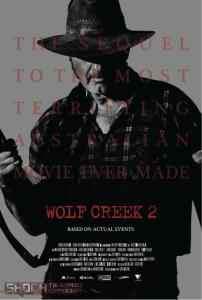 Horror aficionados and people who really don’t like backpackers will be eagerly anticipating the release of Wolf Creek 2 later this year, heralding the long-awaited return of a psychotic John Jarratt sporting a grubby akubra, terrifying sideburns and an (arguably more terrifying) assortment of weaponry. Its 2005 predecessor, Greg McLean’s Wolf Creek, is one of the few Australian horror films to have achieved significant international commercial success, grossing US$27,762,648 worldwide—not too shabby for an independent feature that Empire magazine described as ‘clamping onto your memory like a rusty mantrap’.

Leaving aside the inevitable scepticism about whether a sequel can live up to the original, a more pressing question, in the case of Wolf Creek 2 (also directed by McLean), is whether Australian audiences actually care: historically, horror films tend to leave us cold. But is our lack of enthusiasm a case of cultural cringe, or are we just resigned to the domination of overseas markets and their much larger coffers?

Australia has never had a huge horror industry—we didn’t really start making horror films until the 1970s. Our better-known early exports had a distinctive Australian edge, such as Wake in Fright (1971), Picnic at Hanging Rock (1975) and Long Weekend (1978), all of which suggest the terror inherent in Australia’s forbidding natural landscape; they’re also a far cry from the slasher flicks captivating audiences in the US and UK at around the same time. Australian features with a more obvious horror style, such as Patrick (1978) and Road Games (1981), both had hostile domestic receptions and poor box office takings, but developed cult followings overseas—Quentin Tarantino loved Patrick so much, it inspired a scene in the first Kill Bill (2003). Still, there remains an enduring snobbery about genre films (and not just in Australia); perhaps Patrick and other Ozploitation movies can only gain wider acceptance with younger audiences when they’re endorsed by major names such as Tarantino.

It could also be that the common Australian horror concept of our landscape as a deadly and dangerous place doesn’t impress us in the same way it does audiences abroad. Sure, we might not all live in the outback, but we sure as hell know the rules: it’s big, it’s hot and bad things happen if you start trashing the joint, like Peter and Marcia in Long Weekend (who, frankly, deserved what they got), or if you’re a backpacker who accepts lifts from a guy who acts like Crocodile Dundee and turns out to be way, way less friendly.

Nonetheless, the past several years have seen our domestic horror industry grow, partly in response to worldwide demand for horror, the increasing internationalisation of Australia’s film industry and the rise of digital filmmaking. But projects that achieve success overseas still aren’t winning us over at home, no matter what their brand of beastie: zombie flick Undead (2003) sold into 40 regions and became a cult hit, and crocodile chomp-em-up Black Water (2007) sold into 76 countries, but both made less than $200,000 at the Australian box office.

It’s not just out own output we’re spurning: horror films in general still don’t seem to get a huge market in Australia. When the Evil Dead remake opened in May 2013, it screened at only one cinema in Brisbane; Cabin in the Woods (2012) also had limited release here last year despite being hugely successful overseas. If these films had been given a wider Australian release, would more people have paid to see them? If a tree falls on a serial killer in the woods and there’s no one around to hear it, does it make a sound?

Distribution is obviously a critical element here—marketing and availability are crucial to developing audiences’ awareness of new films, and it could be that not enough industry subsidy in Australia is directed towards the distribution, rather than production, side of the operation.

Maybe the sequel wouldn’t have gone ahead if the international market hadn’t shown such appreciation for John Jarratt and his pathological hatred of young travellers. But does this mean it’s simply going to pander to popular blood lusting tastes, rehashing the original with even more blood, torture and pig shooting? And will Australian audiences care? There’s only one way to find out—it’s coming soon to a cinema near you, and it’s wearing an akubra.

Carody Culver is a Brisbane-based freelance writer and editor and a part-time bookseller. There are few things she enjoys more than watching horror films, particularly if they’re really terrible. She has nothing against backpackers and is undecided about where she stands on akubra hats.