KYD No. 14 Teaser: ‘In the Kabul Bubble: Ex-pat Life in Afghanistan’ 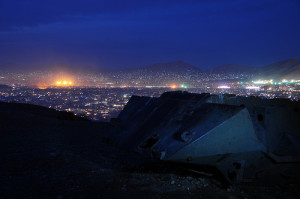 For the third KYD No. 14 teaser, Pip Newling recounts a party in an ex-pat compound in Afghanistan.

Under the cover of night we drove through the Kabul streets into a deserted section of the city. The dark hulks of building sites and old blasted rubble loomed on every corner. The car was full of young American simplicity and flirtation as two strangers, aid workers hoping that Najib or Massoud would go home with them at the end of the night, kept the chatter light and party-focused. Soraya, my friend and colleague, rolled her eyes at me across the back seat. We both shifted our attention to the impenetrable night outside our windows. The car was a black eight-seater LandCruiser and the newest car I had ever been in. It was Najib’s new toy.

The car sped along, despite the potholes. Najib was a good driver and everyone drove fast in Kabul, especially at night. He was also enjoying the attention from the American women and responding in his own charming, encouraging way. Twenty minutes later we pulled alongside the front gate of a compound, a line of other black shiny cars with tinted glass windows parked on the street. Najib glanced back at us.

Pip Newling is a DCA candidate in the Faculty of Creative Arts at the University of Wollongong. Her first book, Knockabout Girl: A Memoir, was published in 2007. She is currently working on her second book. Pip has worked for and supports the Afghan Australian aid organisation Mahboba’s Promise.