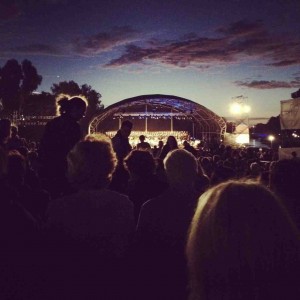 In order to understand Adelaide, you need to recognise that the city exists perpetually on the verge of developing a personality. That sounds sad, but on the ground it’s actually exciting. Most other cities are what they are, and if you don’t like them, your only real choice is to leave. Adelaide’s nondescriptness, however, is exactly what makes it malleable.

The problem with this pliability, however, is that nobody quite agrees how the city should be twisted. At last year’s Adelaide Festival, an outdoor concert led by renowned composer Ennio Morricone was drowned out by V8 supercars on the other side of town. Adelaide couldn’t twist both ways – especially not on the same night.

Adelaide’s emerging art-cum-music-cum-literary scene, though, has until recently ticked along pretty nicely. Everybody seemed to be twisting in unison – even, implausibly, the city council and state government.

In 2008, Ianto Ware and Joel Catchlove ran the first Format Festival: a DIY arts event that, over the proceeding five years, grew to become a veritable DIY arts empire. Because Format persisted, it gained traction, and it began to feel as though the collective was fashioning Adelaide with a distinct, cheeky, sometimes a little freaky, personality.

Over time, a unique literary culture developed around Format. Lisa Dempster, now-director of the Melbourne Writers Festival, programmed Format’s Academy of Words for several years, which was the closest thing Adelaide had, or has had, to its own Young Writers Festival. Format’s zine store and press provided opportunities for young Adelaide writers to see their work in print and on real shelves.

Format has always struggled, which has kind of been the point. The collective have run several crowdfunding campaigns in order to scrape together enough money to cover rent, and have generally preferred to seek support from fans than lean heavily on monetary support from the public sector.

Several weeks ago, though, the state government began twisting in another direction, providing $1 million to Hub Australia to develop a creative co-working space in a building adjacent to the Format venue. In another city, you could imagine both spaces operating side-by-side, but in Adelaide, in a convoluted chain of events, the impending launch of Hub has inadvertently forced Format out of their venue.

Earlier this month, the Format Collective published a widely-circulated blog post suggesting that the government’s ‘sexy Hub plan’ amounts to a ‘breathtaking betrayal’, placing Format (and, presumably, other local artist-run initiatives) in direct competition with government-funded rivals. The post spawned a slightly sinister slogan: Format Always Wins. It was well timed. That evening, Hub held their first ‘co-creation’ evening, inviting members of the public to discuss what they wanted from the new space.

At the event, I met dozens of programmers, designers, small business owners, and ‘serial entrepreneurs’: serious professional creatives, as opposed to Format’s scruffier breed of young punks and artists. Many members of Adelaide’s arts community boycotted the event and used the #FormatAlwaysWins hashtag to flame the Hub project on Twitter, referring to the space as offering ‘meeting rooms for the petty bourgeois’ and ‘taxpayer-funded gentrification’.

It’s likely difficult for those living in a larger city to even grok the issue. It should be possible to develop multiple spaces, each one serving different creative groups, but in Adelaide, it usually feels as though serving one group involves under serving another. Hub appears as though it will serve entrepreneurial creatives – those interested in startup culture – while Format has proven to serve DIY artists more interested in artistic authenticity than angel investment.

At the Hub event, it was mentioned the space could contain $100,000 teleconferencing equipment, which seemed a little funny considering that Format have likely managed half a decade’s worth of festivals and projects for significantly less. At the same time, though: why should it matter? Why can’t a city support both kinds of culture?

Ultimately, Adelaide most likely does have the infrastructure to support both entrepreneurs and artists…and many other groups besides. The issue is really about self-definition. What Adelaide ‘is’ is still unclear. Some members of the state government appear interested in imposing a top-down vision of what ‘Adelaide creative culture’ should be, without consulting those already engaged in fashioning their version of creative culture from the bottom up.

Of course the government want to control the direction of the city’s creative culture (I mean, let’s be realistic: what state government would really be willing to cede any significant control over a city’s culture to a bunch of unpredictable under-30s?), and of course the artists don’t want to feel as though they’re pawns in council and government plans to make Adelaide ‘vibrate’. In a city struggling to develop a personality, culture must be made from scratch.

It’s Adelaide’s malleability that makes cultural change possible, which is thrilling, until somebody starts twisting in another direction entirely.