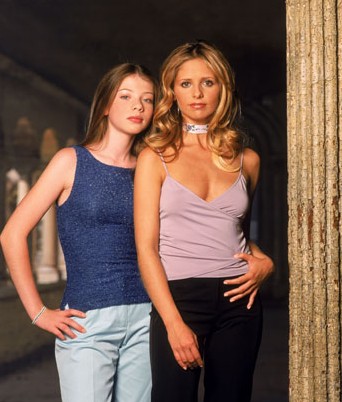 In our list series, ‘Gang of Five’, we make a list of five things related to … whatever we like. Here’s KYD Online Editorial Assistant, Stephanie Van Schilt, with five ‘shit siblings’.

A few years ago, the Triple R Breakfasters would list the ‘lesser’ child of a family in a wonderfully jovial and judgmental little segment called ‘shit siblings’. Directly contrasting brother/sister candidates with their more successful/popular/likeable other, some of these real life pairings are debatable and highly subjective (e.g.  the Costello brothers or River and Joaquin Phoenix). But you get the gist. The shit sibling trope is trotted out quite a bit in various cultural forms, and here are five that come to mind.*

I remember Full House for its catchy theme and ensemble cast of (mostly) lovable characters. If you bypass babe Uncle Jesse (John Stamos) and go straight for the annoying Tanner family members, my namesake Stephanie (Jodie Sweetin), had to be the worst.

As the middle child of three girls, Stephanie was wedged between her pretty, well-spoken older sister D.J. and Michelle – the adorable youngest who was equipped with some killer catchphrase confectionary that easily usurped Steph’s. Full House was never subtle, but in a sitcom brimming with over-the-top performances, Stephanie’s irritating precociousness and know-it-all ways meant she was, by far, the shittest sibling.

In a Disney vehicle, if you’ve got a bit of a British accent, a camp tinge and perhaps darker colour work than the other characters, you’re clearly the bad guy. And Scar (voiced by Jeremy Irons), Simba’s evil uncle from The Lion King, is definitely the antagonist here.

In direct contrast with his bright and booming brother Mufasa, King of the Pride Lands, Scar is bitter, twisted and power-hungry. Killing Mufasa to claim the title, Scar is manipulative, violent and a poor leader – the opposite of his martyred brother, a godly lion figure in the clouds.

Rather than a clear cut good versus evil, awesome versus annoying play off, Billy (Derek Phillips) and Tim Riggins (Taylor Kitsch) are not classic examples here. The Riggins brothers are both booze-swilling, law-breaking, messy louts who have a bad track record keeping jobs, relationships and a roof over their heads. Tim may verge on pathetic at times, but Billy’s various failed schemes eventually see his little brother taking the fall for him (also Billy pees in the sink one time which is gross).

Tim Riggins is a star football player with a gravelly voice, basic manners and charm; the quintessential talented underdog in a show about talented underdogs. On the other hand, Billy is the failed drop kick who ruins most things he touches. We see what Coach Taylor sees in Tim: a good head on his shoulders to match his heart of gold, while Billy is on the sidelines being destructive. Essentially, both Billy and Tim are pretty shit but Tim Riggins, while total shit, is Tim Riggins. He is also very pretty. So that helps. A lot.

Of all the Joss Whedon’s characters, Buffy (Sarah Michelle Geller) is never at the top of anyone’s favourite list. But put her next to her younger sister Dawn (Michelle Trachtenberg), and she’ll win every time. Debuting late in the game, and late in Buffy’s life, Dawn is whiny and irritating teenager who is an obvious plot device for Buffy’s character development, but figures as a shit sibling along the way.

Acting as the framework for all sibling rivalries and shit siblings to follow, religious traditions outline Cain as the first human born to Adam and Eve, and also the first to murder his younger brother, Abel. The ultimate demonstration of a shit sibling, the legacy of Cain and Abel lives on in various texts, from the work of Shakespeare to Steinbeck’s East of Eden.

Honorary mentions: Kyle, Jarod’s brother in The Pretender (remember that!?), ANY sibling from R.L. Stein’s Goosebumps series, Christian Bale’s Dicky is the shit sibling to Mark Wahlberg’s Micky in The Fighter, Paulie is pretty, pretty shit to Adrian in Rocky, and of course Baby Jane to Blanche in Whatever Happened to Baby Jane? is the shittest.

* This topic is in no way a reflection on my own brother, who is wonderful. Obviously, it’s just an excuse to celebrate Tim Riggins.