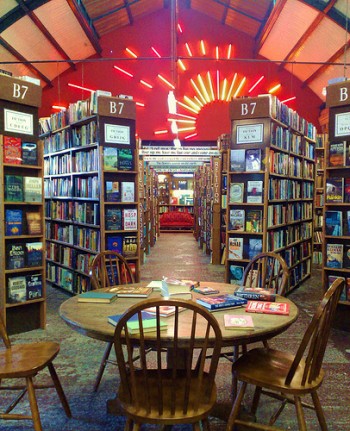 I’ve decided to sell out. I’m over being relegated to the literary fiction shelves, where good books go to die. I want readers – I mean, ‘markets’ – and I’m prepared to dumb it down, sex it up and dog whistle at all remaining points of the literary compass to get them.

It comes down to this: I’d rather write shit that sells than write at the margins. Although a handful of critics say nice things about my work, that doesn’t pay my bills. I have an alter ego, ‘Corporate Serje’, that keeps my family fed and watered. Corporate Serje wears pin-striped suits and is on first-name terms with the barista at the Melbourne Qantas Lounge. Last week, Corporate Serje clocked up 26 hours of overtime and nodded sagely when told to ‘operationalise the strategy’ (that means ‘do it’), ‘helicopter up’ (‘put this in context’) and ‘leverage from the strategic alignment’ (no one knows what that means). Where Corporate Serje skims and improvises, Boho Serje lingers and digs. Corporate Serje reassembles data and facts into policy. Boho Serje hews stories from nothing more than imagination. They are both authentic aspects of my personality, but Boho Serje is fighting for survival as the vastly more successful Corporate Serje consumes her.

So I’m going to write a crappy bestseller. The sort that gets a ‘Book you can’t put down. Guaranteed’ sticker on it. (Never mind that the last time I read one of those I threw it across the room in disgust).

Boho Serje (BS) commissioned a feasibility assessment on this from Corporate Serje (CS). This is what happened.

CS:  If you want to move product you gotta have fang.

BS: Vampires? As in Bram Stoker?

CS: As in Stephenie Meyer. Get out of the library and into the streets, Boho. This is what the market wants.

BS: But Twilight was so turgid I couldn’t read it.

CS: So watch the film.

BS (later): I’m confused. The vampire doesn’t drink blood. And the human love interest is more corpse-like than the vampire. Is this a plea for tolerance of the misunderstood necrophilia community? Or thinly veiled vegan propaganda?

CS: If vampires aren’t for you, how about the feminist epiphany?

BS (suddenly interested): There’s a market for books about female empowerment? Wow. We might really be getting somewhere.

CS: No, no, no. This is the formula: woman who tries to have it all realises that feminism has misled her and true fulfilment lies with having a husband and a baby. Maybe a voluntary role in a glamorous charity.

CS: By the truckload, baby. Think Bridget Jones meets Fifty Shades. You’ll be the darling of the morning television circuit and Bettina Arndt will herald you as the new guru of the x-chromes.

BS: You do know I’m a card-carrying feminist, right? And that women like me are the reason women like you have good jobs in male-dominated industries? Got anything else in that kit-bag of yours?

CS: Let’s try some blue sky thinking. You like the classics, don’t you?

CS: Right. So here’s what you do. Take a well-known classic, stick closely to the original plot, but throw in a zombie or two. The classics are out of copyright so you can rip off as much as want.

CS (impatient): No, it’s reinvention. Now, let’s see (consults list) … The Austens have been taken, and there’s a new franchise on the Biblical stuff … Okay, how about this? Raskolnikov kills off the old woman with an axe but the axe was cursed by gypsies and so she comes back seeking revenge and follows Raskolnikov out to Siberia.

Picture it. The snow. The isolation. The psycho-pensioner picking off the prisoners one by one. Rasknolnikov in the gulag workshop making bombs out of vodka and smuggled copies of Das Kapital. Seriously, Boho, this is gold-plated.

BS: But the whole point to Crime and Punishment is the process of redemption. If you tool Raskolnikov up as a guerrilla-hero the soul of the book dies.

BS: Have you got anything else?

BS: But we’re basically talking about sexualised violence against women, aren’t we?

CS: Finally. You’re getting it.

BS: You want me to write a book where the heroine gets brutally pack-raped and through that process realises she no longer wants to find a cure for cancer but settle down with a wealthy misogynist and have his babies?

CS (excited): Oh, and through her research she’s been exposed to a radioactive chemical that turns her children into blood-drinking super-fiends, and just when you think she’s in mortal danger during a particularly gruesome breast-feeding scene …

CS: But wait! I’m just getting started. Holding her ravaged nipples together, she runs to find refuge in the S&M dungeon her husband built and – hey, where are you going?

BS: Back to the oblivion of literary fiction.