Neuralysing history: race, time and fatherhood in Men in Black 3 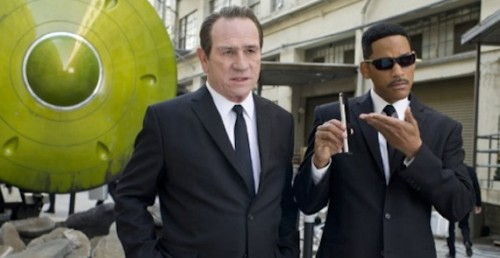 As far as blockbusters go, the recently released Men in Black 3 (dir. Barry Sonnenfeld) might seem to be a fairly unremarkable film. However, the narrative, which continues the story of extraterrestrial law enforcers Agent J (Will Smith) and Agent K (Tommy Lee Jones), is noteworthy for other reasons. With its emphasis on the rescue of a father figure, Men in Black 3 revisits a twenty-year old trend in American cinema, but with distinct racial connotations.

From the early 1980s, Hollywood produced a number of ‘third-part’ films that all shared a particular preoccupation with father–son relations. Among them, Return of the Jedi, Rambo III, Indiana Jones and the Last Crusade and Back to the Future Part III all involved the rescue or redemption of a paternal figure by way of an heroic (biological or symbolic) son. While such similarities may have more to do with American cinema’s pervasive obsession with father–son narratives than to their numerical order of release, these films offer a peculiar insight into the representation of patriarchal relations.

As Susan Jeffords notes in Hard Bodies, the father–son bond is intimately related to concepts of time:

Because the relationship between a father and a son automatically invokes time, these films all take the spans of time as their subjects, with Indiana Jones an archaeologist who explores artefacts from early biblical to ancient Indian religions, with Luke Skywalker as the last in a long line of Jedi Knights, with Rambo fighting the wars of America’s recent past and with Marty McFly travelling through time itself.

MIB3 similarly stresses the importance of time in defining representations of the father–son bond. The central conflict of the film emerges when an alien criminal, Boris the Animal (Jemaine Clement), escapes from a lunar prison and travels back in time to assassinate Agent K, the man responsible for his incarceration. With K dead and the Earth (now defenceless against Boris’s Boglodite army) facing annihilation, J ventures to 1969 to prevent the assassination of the younger Agent K (Josh Brolin) and the destruction of the Earth.

Like those earlier films in which the safety of the community (on a micro or global level) is contingent upon the rescue/redemption of the father, MIB3 reasserts the primacy of this paternal bond. While significant in the context of gender, the emphasis on this father–son bond is particularly fascinating in terms of race.

Replicating the buddy-cop formula of the earlier Men in Black films, MIB3 foregrounds the father–son relationship between K and J far more overtly. Inverting the black father–white son dynamic that characterised the Lethal Weapon series, MIB3 constructs an image of heroic black masculinity that is contained in and through its relationship to white paternal authority. J’s success as an MIB agent is repeatedly attributed to (and measured against) the skills and mentoring of K. In keeping with the ideology underlying most racially mixed buddy films, MIB3’s male partnership works to reaffirm a patriarchal dynamic in which black agency is limited through its framing opposite a superior white subjectivity.

The racial significance of MIB3’s representations are further dramatised by the film’s historical setting. Despite the cautious warning that J receives just prior to his ‘time jump’ (‘1969 wasn’t the best time for your people’), MIB3 avoids any substantiative reference to civil rights protests or the treatment of African Americans in the 1960s. Instead, the film reduces these conflicts to a single-scene gag in which J is pulled over by two overzealous white police officers who suspect him of driving a stolen motor vehicle. That J has in fact stolen the car allows the film to indulge racial stereotypes of African Americans under the guise of a contemporary racial awareness, without questioning the basis of those racist assumptions.

However, it is the more specific historical event of the Apollo 11 launch, the backdrop to the film’s climax, that ultimately fuses together the themes of time, father–son relations and race in MIB3. Described by President Nixon as ‘the greatest week in the history of the world since Creation’, the Apollo 11 mission served as a temporary symbol of hope and celebration that obscured the concurrent racial violence occurring in America and abroad (for example, in the Vietnam War).

In a similar fashion, MIB3 appropriates the events of Apollo 11 to rewrite J’s personal history. In a climactic twist it is revealed that both a young J and his biological father (a US Army colonel) are present at the site. In the final moments before the launch, Boris kills J’s father. Upon discovering the young J, K opts to ‘neuralyse’ him (erasing his memory of the traumatic event) and informs him that his ‘father was a hero’. In sacrificing J’s biological father MIB3 consolidates a vision of history where the responsibility for African American identity is dependent upon a benevolent white paternal authority.

Somewhat ironically, MIB3 is only able to achieve this racial substitution by rewriting its own narrative history, since at the conclusion of the first film K remarks to J: ‘You should’ve been here for the Zeronian migration in 1968. I guess you weren’t even alive in ‘68.’ Given the age that young J appears in MIB3, his presence at the Apollo 11 launch (in July 1969) is a glaring anachronism.

It’s this revisionist attitude that Jeffords also notes in those films of the 1980s:

One of the keys to the success of these films is not only their resolution of father/son relationships but their appropriation of time. In each case, a “happy” ending depends upon the ability of the hero to overcome the limitations of time, to rewrite history, to restructure the future, or to rescue the father from the burdens of time itself.

Ultimately, MIB3 achieves its ‘happy’ ending via the same means. It neuralyses history and replaces it with a version of the past, present and future determined by white fathers and their surrogate offspring.