My shadow flows into the world: Lindy Lee and explorations of self 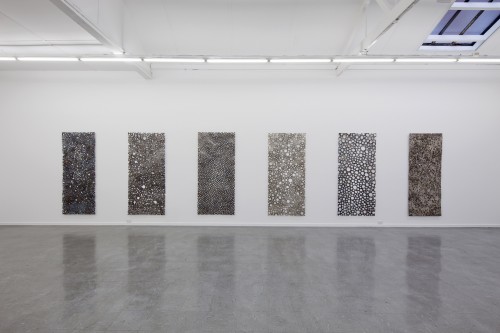 Upon entering Lindy Lee’s latest exhibition in Melbourne, ‘Mystical Realism – A Record Of Things Experienced’, I was confronted by a range of images, textures, shapes, patterns, configurations and materials. Among the more traditional painterly and sculptural media of paper, ink, linen, steel and bronze, Lee also lists ‘fire’ and ‘rain’ as instruments of creation. These weather elements don’t appear in physical form, but their presence is clearly visible in the burns and watermarks left singed and streaked across the fifteen works exhibited.

The remnants of ‘fire’, as well as evidence of Lee’s own beliefs (she is a dedicated Zen Buddhist), are seen in Mudras 1-11, a series of eleven small photographs (each 40 x 30 cm) of human hands in various positions, printed onto black steel, and burnt through with holes of varying size. Mudras are specific hand gestures often used in Buddhist iconography and meditation, each associated with a specific meaning or narrative. The hands in Lee’s photographs appear to be performing these signs, but due to the rust-coloured burns and holes in the steel, the details of each photo become obscured. One hand is raised, as if waving – or is it protesting? Another holds a flame, as if to light its bearer’s way – or perhaps to create the very holes and burns that make it so difficult to discern the flame’s purpose. In this way, Lee folds her own pyrographic practice back upon itself, and the distinction between the creator and the created becomes blurred.

Furthermore, her conflation of the spiritual, the bodily, the creative and the quotidian in Mudras 1-11 invites gallery visitors to reflect upon their own practice of interpreting art. I found myself asking: to what extent should interpretative practice be understood as a rite? Or should viewing art be considered a more mundane activity, part and parcel of the work of a critic? Lee seems to suggest that the spiritual should not be separated from the ‘everyday’, and that both should wholly inform the interpretation of our own and others’ expression and experience. 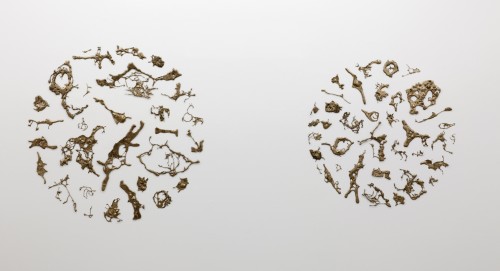 The process of meditating upon Lee’s work became especially profound for me while considering Elemental and Fragments of the Way, two sets of hardened bronze shapes, each constellated in a circle and mounted on the wall. In relationship to similar works exhibited in 2009, Lee stated:

Ch’an (Zen) Buddhist monks would meditate for a period of time and then fling the ink from a container. The mark that results encapsulates the totality of the universe – the sum of all conditions, which underlie the creation of ‘this’ moment.

Elemental and Fragments of the Way mimic this practice, using bronze instead of ink, and the longer I stared at the ‘marks’, the more images and stories were illuminated before me. Windswept grass. A ruffled wave. Brains. A frog, a moose, and antlers, a cat playing with a child. Howling angels. A skeletal surgeon operating on a corpse. Fairies. Intestines and a dinosaur. Clouds. Clods. A rose in a clutch of bones. I eventually realised that all the pictures I saw in the splattered bronze shapes were images or combinations of images that I had absorbed from my own experience. Lee’s ‘moment’, splattered across the gallery wall, represents an infinity of imagery and ideas. You both affect and are within creational forces, Lee seems to say. 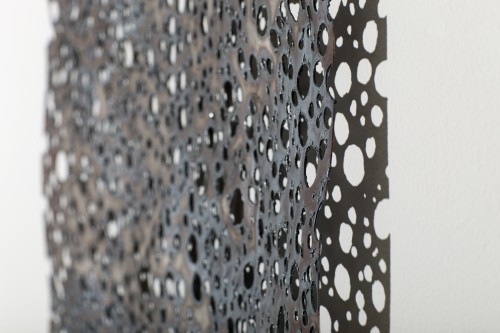 A work even more affecting than the flung bronze was My Shadow Flows into the World. This installation comprises six large rectangular sheets of milled steel (each about 200 x 90 cm) perforated with holes made from fire. One piece, My Shadow Flows Into the World (stones flying up to heaven), is covered in holes so large that the steel becomes a mere frame for Lee’s shadow – or our own – to flow through into the wider universe. Another, My Shadow Flows into the World (burning into water) is so burned and blackened that barely any of the steel’s original lustre shines through. Steel and fire and air and shadows are constellated and re-constellated as the sheets are viewed from different angles, perhaps suggesting that the idea of the ‘self’ as we understand it is actually as malleable and intangible as the light that may flow through it.

Although this collection points in every case to the elemental, the universal and the fluidity of self, there is something intensely personal about these artworks. In pointing viewers to different understandings of the self and the world, Lee also presents us with herself in the world – or the world in herself – and provides viewers with the privilege of using her own record of experience to interpret our own existence.

‘Mystical Realism – A Record of Things Experienced’ is at the Sutton Gallery, 254 Brunswick Street, Fitzroy, until 23 June 2012.

All images courtesy of the artist and the Sutton Gallery, Melbourne.

Julia Tulloh is a Melbourne-based writer.