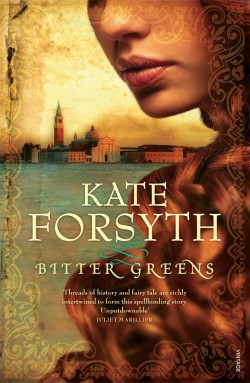 Much of the novel is a variant of ‘Persinette’, better known as ‘Rapunzel’, which alternates between the point of view of the witch and the girl in the tower. The rest of the novel functions as a fictional autobiography of one of the fairy tale’s earliest revisionists, Charlotte-Rose de la Force. Intelligent, stubborn and armed with a tongue that’s ‘long enough and sharp enough to slit … [her] own throat’, de la Force scandalously dabbles in sex, intrigue and black magic, before being banished to a convent by her cousin, Louis XIV. At the Abbey of Gercy-en-Brie, she is befriended by an old nun, Soeur Seraphina, who recounts the story of the girl in the tower, which would later become the foundation for ‘Persinette’, de la Force’s redemption and greatest work.

Framing the fairy tale within the ‘real world’ has been done before in works such as William Goldman’s The Princess Bride (1973) and Andy Tenant’s Ever After (1998). However, commanding a third of the novel with her courtier’s wit, de la Force is more than just a narrative device. Forsyth shows much sympathy towards her morally ambiguous literary predecessor, echoing the affection de la Force feels towards her own characters – both the witch and the girl in the tower are rewarded with happy endings. In ‘The story behind writing “Bitter Greens”’, Forsyth notes:

I was completely smitten with the character of Charlotte-Rose de la Force. A woman who disguised herself as a dancing bear to see her lover was exactly my kind of woman! I read more about her and discovered that Charlotte-Rose’s life story was filled with scandal, drama, intrigue and romance. She struggled against the strictures of her time to be free to write and love and live as she pleased. I felt a very strong kinship with her, imagining what it must have been like to have lived at a time when women were powerless.

Nevertheless, while Bitter Greens is partly a writer’s story, it is not a leisurely reflection on the creative process. Too busy defusing scandal after scandal – including the very public loss of her virginity and her ongoing refusal to attend to the Catholic faith – de la Force does not have the luxury of introversion. Forsyth doesn’t either, always trying to offset the inertia and predictability of ‘Persinette’ in a juggling act: three points of view, two historical settings, the blend of dark fantasy with historical reality, and the fleshing out of societies that are alien to our own. Forsyth mostly succeeds. Even though the heroine is locked away for four years in a tower, Bitter Greens skips around enough to still be an engaging read.

The initial set-up of de la Force’s narrative could have been more elegantly done, though. Sometimes the explanations of historical detail are intrusive: ‘I snapped my powder box shut and thrust it at her, snatching the small jewelled container in which I kept my patches, the little beauty spots made of gummed taffeta that were very useful for hiding pimples or smallpox scars.’ It feels like Forsyth’s showing off the depth of her research or perhaps addressing a younger audience. But these are cosmetic blemishes.

While the innocuous ‘Persinette’ may be the creative muse behind Forsyth’s latest offering, it is the complexity of the telling as well as the sexual content that pushes Bitter Greens out of the nursery and into the adult world where fairy tales once belonged.

Thuy Linh Nguyen reads and writes when she can. For more on her literary adventures, visit thuylinhnguyen.wordpress.com.