Program or Be Programmed: Ten Commands for a Digital Age – how digital media is shaping our lives and what we can do to take control 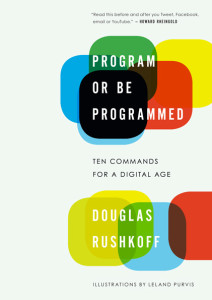 There have been plenty of books lately on the subject of how digital media impacts negatively upon our personal lives, from Nicholas Carr’s The Shallows to Susan Maushart’s The Winter of Our Disconnect (in which the Perth-based journalist and mother undergoes a ‘digital cleanse’ with her family for six months) and William Powers’ Hamlet’s Blackberry (who also instills an ‘Internet Sabbath’ in the home). These books provide useful suggestions as to how we might live better through regular ‘digital detoxes’, but on a theoretical level, they don’t go too much further than putting forth a Luddist view of technology as something to be avoided. This is not too useful in an increasingly digital world.

Douglas Rushkoff’s has contributed many constructive insights as to how we might employ digital culture to its best advantages. Rushkoff is Professor of Media at New York State University, and has written several books on the subject, most of which focus on the impacts of technological advances in the media industry and the consequent sociological and political implications. His latest book, Program or Be Programmed: Ten Commands for a Digital Age is a slender addition to his body of work, almost like a political pamphlet aiming to prepare us for a digital future.

The central premise of the book is that we are becoming passive and ignorant consumers of technology, lulled by the interactive nature of the internet into thinking we possess new levels of autonomy. In fact, argues Rushkoff, with little knowledge as to how digital media works, most of us fail to realise how it impacts upon our own humanity, and instead become unwitting cogs in a grand, corporate apparatus.

Each of the ten chapters – or ‘commands’ – in Program or Be Programmed highlights a different bias within digital media, and suggests how we might counteract its potentially harmful effects. A bias in this sense, explains Rushkoff, is ‘simply a leaning – a tendency to promote one set of behaviours over another.’ For instance, ‘… guns are a technology more biased to killing than, say, clock radios. Televisions are biased toward people sitting still in couches and watching.’ Through understanding the innate biases of any technology, Rushkoff argues, we may then be able to ‘differentiate between what we intend, and what the machines we’re using intend for us’.

The biases Rushkoff discerns within digital media are wide-ranging and mostly negative, including: it messes with our nervous systems; it displaces us from real, physical realms so that we don’t fully participate in life; it fools us into thinking we have an abundance of choice, when really those choices are not meaningful; it fools us into thinking we can ‘know’ everything; it is biased toward big business, at the expense of local businesses and communities; it encourages us to behave anti-socially (including ‘selling’ friends); and it devalues creative content. In fact, the only really positive bias Rushkoff uncovers is that the internet leans toward truth-telling and non-fiction, because – as in real life – the sharing of information has an almost Darwinian natural order in which truths, or ‘memes’, will prevail through popular agreement, whereas falsehoods will eventually be revealed as such and discarded by the community.

Rushkoff’s suggestions for counteracting the negative impacts of these biases are generally straightforward. If we are displaced from time and space, his solution is, predictably, to ‘not be always on’ – to disconnect, and to place value instead in face-to-face, physical interactions. Regarding the use of the internet as a primary information source, he simply asks us to be aware of its pitfalls, and not to consider a search engine the be-all and end-all of knowledge.

Despite these negative biases, Rushkoff is clearly an enthusiast for digital media, and his penultimate chapter – also the title of the book – is perhaps intended as his most important weapon. While any old Joe Bloggs can blog, most of us have little or no understanding as to the programming biases behind the tools used to produce such content. So, of course, Rushkoff suggests we should all learn basic computer programming in order to better understand the processes behind digital media.

But while Rushkoff may be deeply passionate about programming, my own curiosity in this subject didn’t extend to the practical level. There’s no straightforward information provided in the book as to what programming actually involves, apart from a few links at the back (some of which are incorrect addresses). Although I did follow up these links, I became impatient waiting for my slow internet connection to load, gave up, and promptly forgot about the task. I dare say I won’t bother returning to it because, as William Powers heralded as the greeting of the future, the digital world has made all of us “Busy! Very busy!”. Hopefully, these arguments will prove more persuasive for educators or policy-makers – it can only be a good thing if programming is more prominent in curricula – but I don’t think the average person who uses computers simply as tools for work or socialising is likely to pursue this challenge very far.

Overall, though, Program or Be Programmed provides some thoroughly interesting and refreshing insights into some of the problems potentially facing humanity in an increasingly digital world. This is a book for people who are interested in having a better grasp of, and control over, the digital media that permeates our lives. It is an accessible, at times charmingly personal, introduction to a world otherwise perceived as only for extreme geeks.

Hannah Francis is a freelance writer, bookseller and musician. She blogs at culturedanimal.com. 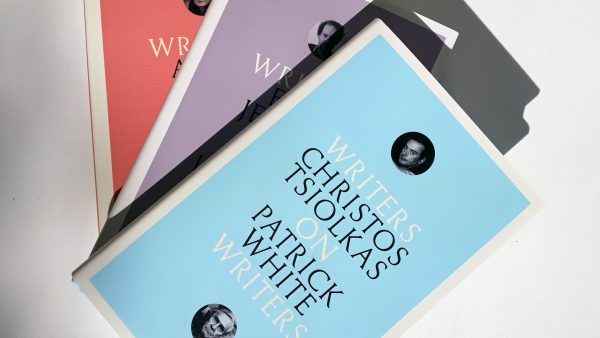