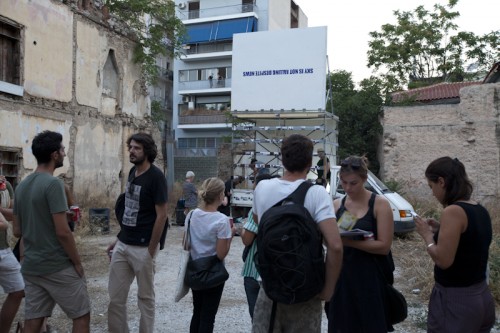 In September this year, Nella Themelios and I curated an exhibition at ReMap3 for BUS Projects entitled Kerameikou 32. ReMap is a contemporary art festival that started in 2007 and runs alongside the Athens Biennale. The festival takes place in the Kerameikos-Metaxourgeio (KM) area of downtown Athens, which is reminiscent of an urban slum. KM is renowned for its numerous brothels and a drug culture so rife that people shoot up openly on the streets. During ReMap, local and international art galleries, as well as independent curators, use the many abandoned buildings and empty plots in the area for exhibitions and performances, transforming the area into a veritable hub of artistic output.

For Kerameikou 32 we collaborated with local architects João Prates Ruivo, Beth Hughes and Vassilis Oikonomopoulos to fit out a truck as a gallery and performance venue. The truck was stationed on Kerameikou Street for the duration of the opening week of ReMap3 and featured the work of Australian artists Kay Abude, Ros Bandt, Michael Fowler, Agatha Gothe-Snape and Dylan Martorell. We were interested in exploring the relationship between art and public space and attempted to imagine a new kind of roving ‘institution’.

My grandfather was sent to country New South Wales from a small village in the Peloponnese in 1927, when he was just fourteen years old. In those days, being sent to Australia was like being sent to the moon. Nowadays it is still considered a long way, but you can make the trip in a little over twenty hours.

In 2006 I went to Greece for the first time and I have been back every year since. My Greek is pretty basic. I can get around, introduce myself, order food and direct a taxi but most of the time I resort to explaining, in Greek, that I speak very little Greek at all. Sometimes I stress the ‘little’ or repeat it for emphasis. Over the years I have thought a lot about my relationship to Greece – especially since I am only half-Greek, and in many ways not very Greek at all, but that’s another story.

On this most recent trip, I found Athens radically different. There was a marked feeling of despair and hopelessness reflected in people’s faces. For all that Greece is in the news at the moment, we do not hear just how much people are suffering. In fact, I find myself enraged by the bias of the media and how much of the crisis is portrayed as Greek greed and recklessness (okay, there was that too, but what about the fact that when Greece changed its currency to the euro, inflation went through the roof but wages stayed the same? Or even the fact that Greek wages are notoriously low compared to the rest of Europe?). Now the already low wages have been slashed, everything has become more expensive, and every other day the city comes to a grinding halt with total transportation strikes. On such days there are no taxis, buses or trains, and the traffic is gridlocked, as those who have cars are forced to use them and those who do not are stranded. 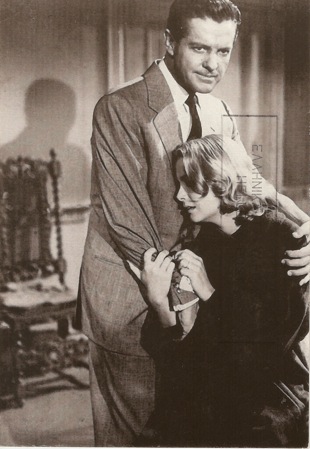 I found some postcards of stills from Alfred Hitchcock films at a kiosk in Monastiraki. They were littered amongst the standard postcards featuring the Acropolis, sunsets over aqua waters, whitewashed houses, and shepherds with their donkeys. They were 1€​ each and I bought them all.

At the same time as the economy has slumped, there has been a sharp increase in illegal immigration. Greece has always been a gateway into Europe but recently, as Italy and France have stepped up their border patrols, it has become almost impossible for people to move on. So, whilst in the past some immigrants stayed and others continued into other parts of Europe, now they are stuck in Greece. And yet there is no work to support the increase in population. People do what they can for money, including selling imitation designer handbags on the street or scouring through suburban dumpsters for pieces of metal that can be sold at for just a few euros at the scrap metal yards.

We were told that a shot of heroin in the KM area could be bought for just seven euros. Every day we saw dozens of people shooting up on the street, just metres from our exhibition site. We named one guy ‘shoot ‘em up Larry’ due to the number of times we saw him hit up in a day. There was a whole street of people nodding off on cardboard boxes, scavenged from the rubbish and laid out as makeshift beds. More than once someone passed out in front of our site and we had to check they were still breathing. We saw junkies shoot up into their arms, thighs, hands and even their penis or eyes. It was heartbreaking.

In the local square was parked a large armoured police van, yet just two blocks away people were shooting up openly. Occasionally a police car would drive down the street flashing its lights, but that seemed to be about it. Amongst all of this the locals of KM continue to go about their lives as normal, as best they can. The ballsy women in the Chinese grocery store across from us shooed junkies from the front of their store with brightly coloured fly swats. 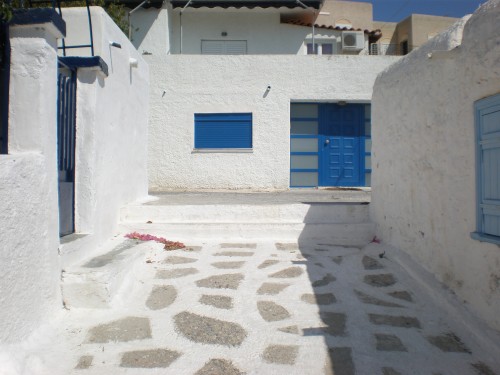 The last week of my trip I took a boat to Aegina where I spent a few days swimming in the Mediterranean and soaking up the sun. I needed a break from KM, if only an aesthetic one. Arriving in Aegina I was struck how, unlike Athens, Aegina seemed the same as when I had last visited. I wondered if through all the political turmoil that Greece has endured in its modern history – the Turkish and later German occupation, the civil war and two dictatorships – if life on the islands has remained more or less unchanged compared to the mainland.

Sitting by the sea one day I pulled out the Hitchcock postcards and wrote to myself; for some reason I didn’t feel like writing to anyone else. I wrote to tell myself I was thinking of me, that I hoped I was well and that my trip home hadn’t been too exhausting. I mailed them to St Kilda just before I left Aegina so that they would arrive after I got home. 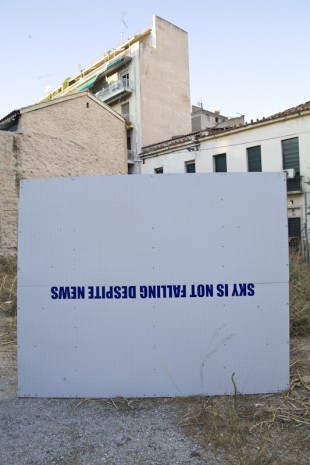 After the opening week of ReMap3 we packed down the Kerameikou truck, leaving one of the artworks behind as a freestanding billboard for the remainder of the exhibition. Agatha Gothe-Snape’s text work ‘sky is not falling despite news’ served as a somewhat subversive reminder amongst so many messages of gloom that despite everything there is still hope – not just for Greece, but for all of us.

Melody Ellis is a writer and curator based in Melbourne. She is currently completing a PhD in creative writing at RMIT University.