History in the service of fiction: Anna Funder’s All That I Am 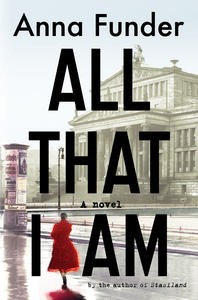 The first thing I did after finishing Anna Funder’s debut novel All That I Am was to order a copy of Ernst Toller’s autobiography I Was a German. Toller features as a ‘character’ in Funder’s much anticipated book. We meet him holed up in a New York hotel in 1939, increasingly despairing of shaking the United States out of its apathy about the Nazi threat. Having failed as a script writer he spends his days dictating a new version of his autobiography to his secretary, a version that will include the interior, emotional detail missing from the first. No emotional ingredient is more important than Dora Fabian – activist, feminist and the brave soul who smuggled Toller’s manuscript out of Germany. In Funder’s version of events Dora is the great love of Toller’s life.

I was curious to know if this revised autobiography actually existed or if it was one of the narrative devices employed by Funder in the service of her story. It’s the sort of curiosity Funder’s publishers have pre-empted by emblazoning the words ‘A Novel’ on the cover of the book. This is a work of fiction, the cover declares. The story contained herein is a product of the author’s imagination and no correspondence will be entered into. But the declaration is undercut by the use of real names (Toller, Fabian, Bertold Jacob, Hans Wesseman) and the tantalising appendix on sources, in which Funder says

When Hitler came to power on 30 January 1933 my friend Ruth and her friends fled into exile. From there, they tried to bring him down. This is their story, or what I have made of it. It is reconstructed from fossil fragments, much as you might draw skin and feathers over an assembly of dinosaur bones, to fully see the beast’.

This is an open invitation for anthropological inquiry into the beast that Funder has created. Curiosity about which parts of the story were ‘bones’, and which, ‘feathers’, distracted me from the compelling, rich narrative.

As is to be expected from the author of Stasiland, the brilliant account of how the German Democratic Republic’s secret police colonised the lives of its citizens, Funder evokes the Weimar era with a tactile, even claustrophobic, clarity. Berlin has all the heady decadence one expects, complete with an evening in a night club where naked statues provide the entertainment and the patrons snort cocaine. When the characters at the centre of the novel are forced into exile by the rising Nazi machine, their dislocation in a London that doesn’t really want them (or at least doesn’t want their warnings of what is coming) is palpable. In their former lives, they were movers and shakers in the cultural and political life of Germany. In London, they must battle anonymity, language barriers and the baffling social subtleties of the English upper class. They must also be seen to honour the condition of their visas – no political activity – or face deportation back to Germany. It is a test that some will face with jaw-dropping moral courage. And some will catastrophically fail.

This is an important story. I – English born and a historian by training – knew very little about how actively the Gestapo harassed and brutalised political refugees in London. I knew a little about Dora Fabian but not enough to place her alongside resistance heroines like Sophie Scholl or Helene Moszkiewiez. There are moments in this book where readers must stare down uncomfortable contemporary parallels, such as when the St Louis is refused entry to the USA and ultimately returns its boatload of Jews to Germany. More than 250 of the ship’s passengers died in the holocaust.

The hybrid of fiction and history is not without its pleasures. For those of us with unfashionably modernist compulsions to sort the ‘real’ from the ‘fictional’ sleuthing has its rewards. It’s a pleasure Funder well understands, as she recently told me: ‘I think that detectives and novelists have overlapping areas of psychological concern – both are interested in accounting for human behaviours from the evidence we see of them.’ But the form also creates a tension that a work of straight-up fiction avoids. Just as it takes time for gruesome events to comfortably form the butt of jokes, does it take time for historical events to be treated with the licence and informality of invention? We are dealing here with living memory. Indeed, one of the characters (Ruth Becker) is based on Funder’s friend Ruth Blatt, whose extraordinary trajectory brought her to Melbourne via a German prison and exile in Shanghai.

But in Funder’s novel Ruth is not transplanted to Melbourne, but to Sydney. And she appears on the page not as Ruth Blatt – her real name – but as Ruth Becker; perhaps Funder’s nod to the liberties she has taken in imagining her life. By Funder’s own account, Ruth never spoke about her relationship with either Toller or Fabian in Funder’s presence. Fabian and Blatt were not cousins – as the novel has it – but friends. These re-workings of historical fact into imagined fiction make sense when the work is approached as a novel – that is, a form with certain conventions. So, the shift from ‘real’ Melbourne to ‘imagined’ Sydney creates a contrast between the diamantine beauty of the harbour and the grey, dour London of the preceding chapters: precisely the light-and-shade contrast that fiction works with. Making Ruth and Dora cousins is a useful shorthand for their bond and sometimes conflicted loyalty.

Wise and considered readers and critics I know are recording these ‘shorthands’ as factual on their blogs and in their articles. When I asked Funder what she made of this tendency she said that ‘there are boundless inaccuracies out there. I provided notes in the novel both to honour sources, and to enable people to go and find out what is on the historical record if they are interested’. The credentials Funder established with Stasiland perhaps account for a good part of the expectation that Funder has stuck close to the historical record in all things. Funder told me that in All That I Am ‘I made up the plot. I made up the characters’ interior lives, interactions, gestures, relationships, involvements … That said, everything that happens in it might have happened, there is nothing important in a plot sense in it that is contradicted by the historical record as I came across it.’

Funder resolved the history/fiction tensions in Stasiland by explicitly writing herself into the non-fiction narrative. She situated herself as a sympathetic, inquiring and insightful historical observer of the German Democratic Republic. In All that I am Funder is absent. She does not tell us when she is speculating, embellishing or outright inventing. We are left to ferret this out for ourselves – a process that has its joys, but can prove mightily distracting when one wants to get lost in such a fascinating story.

S.A. Jones holds a PhD in history from the University of Western Australia. She is the author of the novel Red Dress Walking and numerous essays.