‘Are you saying New Orleans is not a great city?’: the stories of Treme 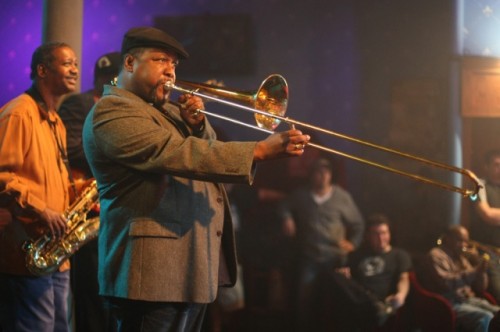 Treme is the latest television series from David Simon and Eric Overmyer, who created and produced HBO’s The Wire. Treme is set in the New Orleans district of the same name three months after Hurricane Katrina, and details the ways in which individuals, families and the community as a whole begin to reconstruct their lives after the floods. Though hundreds have been displaced from their homes and almost everyone is broke or unemployed, Treme strives not to be heart-wrenching or pity-evoking. Rather, it functions as homage to the cultural diversity and fighting spirit of a neighbourhood that has struggled with racial and social injustice since well before the 2005 catastrophe. Australia’s Showcase channel is rescreening both seasons of the series during October and November, which seems timely considering Hurricane Katrina’s sixth anniversary passed just over one month ago.

Treme unfolds as a series of stories, sometimes interweaving (many of the characters are friends with each other or interact professionally), which together create a broad cultural snapshot of Treme in late 2005. The show covers an extensive cross-section of society: the wealthy, the poor, black and white Americans, women, men, families, and a range of professionals such as lawyers, restaurateurs, an English professor, an Indian Mardi Gras Chief and, of course, musicians. The flood affects everyone, and so the disaster functions as a type of social equaliser. At the same time, Treme does not ignore the real problems that arise as a result of racial difference: LaDonna, an African-American bar owner, must battle a history of institutionalised racism when it becomes clear that her brother is missing after the storm due to a mistake made by a corrupt (and largely white) police force.

Since the series focuses on ten main characters (with more than a few regular extras), cuts between characters’ stories occur frequently, and often without a sense of closure. Story arcs and character development are gradually revealed over the entire first season (sometimes over the first two seasons) and even then may be unsatisfying for the viewer who expects the cycles of suspense and resolution often seen on television. English professor Creighton’s plunge into depression over the city’s neglect by the Bush administration and what he perceives as the devaluing of New Orleans culture culminates tragically at the end of the first season, but is not fully explained or dealt with. Rather, it creeps up on us and arrives all of a sudden – perhaps in the way it would if we knew him in real life.

While all this makes for quite a slow-paced show, it also invites viewers to participate in the story. We must concentrate and listen, and we have the time to concoct our own interpretations, to consider character motivations and engage with the series as we might a good novel. Furthermore, the pacing contributes to a sense of reality – situations in life are rarely resolved neatly, especially those immediately following a city-wide catastrophe.

The sense of the ‘real’ is heightened by Simon and Overmyer’s attention to culturally specific detail. Not only are some characters based on real New Orleans residents (character Davis McAlary is based on disc jockey and musician Davis Rogan, and Creighton is based on New Orleans blogger Ashley Morris), but the creators regularly include real Treme-based musicians such as Kermit Ruffins and Allen Toussaint in many of the extended jazz and R&B music sequences. Most of the cafes, bars, streets and bridges are all real places (many shot on location) and the inclusion of a Hubig’s Pie being served to Creighton by chef Janette in the first season has been widely discussed (for example, by Meanjin), since the Hubig’s factory was not actually rebuilt until 2006.

Clearly, Simon and Overmyer have a deep love and respect for this community and are trying to elaborate precisely what it means to be a part of Treme. It is difficult, however, to fully feel a part of Treme as a viewer. Even though I connected deeply with the characters’ struggles, it was not until I researched the area of Treme and the background of the series that I began to fully appreciate the neighbourhood’s rich cultural history.

Yet Simon and Overmyer seem conscious of the potential disconnect between the show’s detail and viewers’ understanding of it. Characters actually demonstrate a distinct hostility to Treme outsiders – busker Sonny snaps at a group of aid volunteers who have travelled south to help ‘save New Orleans’ (if they didn’t care before the flood, why should they care now?) and sneers at them when they request ‘authentic’ New Orleans music. Ironically, it is the lack of outside help that other New Orleans residents, such as Creighton, have become so bitter about; furthermore, as a busker, Sonny is entirely dependent on the money the volunteers give to him. The series then reveals the complexity of, and difficulty in, resolving the tension between Treme’s (and New Orleans’, more broadly) desire to remain culturally distinct and exclusive, but also to be respected and valued.

For most of us, of course, New Orleans has always been distinct and respected – at least in a cultural sense. So when a TV presenter in Treme’s first episode questions the need for increased government support in New Orleans and Creighton responds by asking, ‘Are you saying New Orleans is not a great city, a city that lives in the imagination of the world?’ our own answer may be a resounding ‘no’. But perhaps now, more than ever, New Orleans and Treme are cemented in the world’s imagination due to Simon and Overmyer’s re-imagining of them – particularly the series’ implicit invitation to engage with and more fully understand both the city and neighbourhood.

Julia Tulloh has just returned to Melbourne after completing a Masters in English Literature at the University of Edinburgh, and now works as a freelance writer.