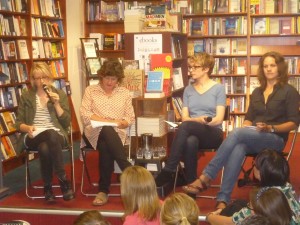 On the hundredth anniversary of International Women’s Day, over 100 bookish types packed among the shelves of Readings Carlton in Melbourne to hear a panel of Australian literary women talk about the very timely hot topic of the moment – the oft-suspected, recently proven underrepresentation of women in the world of books and writing.

The session was chaired by Rebecca Starford, editor of Kill Your Darlings. Participants were Sophie Cunningham, novelist, former publisher, commentator and recent editor of Meanjin; Louise Swinn, editorial director of Sleepers Publishing and a writer and reviewer; and Monica Dux, The Age opinion writer, author of The Great Feminist Denial.

The conversation began with a sobering reflection on those statistics recently released by VIDA (a relatively new US organisation for women and the arts), which revealed a stark gender bias in the pages of a wide range of literary institutions, including The New Yorker, The London Review of Books, The New York Times Book Review and Granta.

Rebecca Starford presented the findings of her own mini-survey of the current situation in Australia, based on the records of trade magazine Bookseller & Publisher’s weekly supplement, Media Extra, over the first two months of 2011:

Things were still skewed, but less so, at Australian Book Review. In 2010, 356 books were reviewed: 210 authored by men, 146 (41%) by women. The numbers of reviewers was fairly even. Interestingly, though, only 27% of the books by men were reviewed by women.

One of the explanations commonly offered for this disparity is that men are more willing to put themselves forward than women. Talking to The Book Show recently, (in a segment that was often cited during the night’s discussion), the literary editors of The Australian, The Age and The Sydney Morning Herald all mentioned that they receive far more pitches from men than women.

Sleepers Publishing’s Louise Swinn reported that she receives more book-length submissions from men, though the submissions for the annual Sleepers Almanac anthologies of short stories are evenly split between men and women.

Sophie Cunningham, talking about her recent role as editor of Meanjin, had a particularly interesting story to tell – gender ratios “varied wildly” depending on the genre of the submission. “I had to work very hard to make sure that women were properly represented in non-fiction,” she said. “Because in terms of essays received, I was getting a lot more essays by men, if you keep memoir out of it. The pieces by women did tend to be a lot more personal and written out of their own experience.” Looking back on her time at Meanjin, Sophie said that while 52% of the essays overall were by women, 75% of the memoir pieces she published were written by women. (In that time, incidentally, 53% of the fiction and 35% of the poetry was by women.) Speaking specifically about Meanjin’s CAL-sponsored series of essays on cultural institutions, Sophie said it was difficult to find women to write these pieces. “Women often said, I’m not an expert, I don’t know that I’ve got the time, and were generally a lot more diffident about tackling those subjects where they were expected to be fairly aggressive in their analysis.”

Louise backed up Sophie’s point with a quote from Alizah Salario’s piece, ‘Twenty-Three Short Thoughts About Women and Criticism’ on Bookslut: “At her most basic, a good critic must possess a certain amount of chutzpah in order to believe other people will read – and care about – what she has to say. Call them audacious or simply arrogant, critics must have the confidence to write with conviction. They must demonstrate to readers why, of an infinite number of interpretations, theirs speaks a truth (but perhaps not the truth).”

Louise reflected, “I think maybe we’re not always encouraged to think that our experience can be the experience.”

Monica Dux said that though the VIDA statistics are “appalling”, she’s “not actually that surprised”, having spent the last couple of years of her life looking at women’s representation and writing about women. “It’s a reflection of society. I think we have this idea that writing is somehow more transcendent, and that it must be more noble.” She cited the current debate about the underrepresentation on women on boards as an example of where this situation is reflected in the wider world.

“I think that women actually need to push themselves out of their comfort zone, otherwise we’re stuck in this loop,” said Sophie. “I got really frustrated with the number of women who said, I’m not an expert. I tell you what, the men I was ringing up asking to write on subjects weren’t saying, I’m not an expert.” She said that she often tended to use good female non-fiction writers “several times over”, citing Sian Prior and Lorin Clarke as two of her go-to writers. She believes this likely results in her figures being “fairly skewed, in the way I think The New Yorker figures are … I think if you took Susan Orlean out of the mix at The New Yorker, you’d end up with about two [non-fiction women writers].”

Monica agreed with Sophie’s idea about the need for women to push beyond their comfort zones, drawing on her own experience as an opinion writer. “Those first few experiences of sending an unsolicited opinion piece were excruciating. Writing is, by its nature, very much about confidence.” She said she started writing “almost by accident”, as a result of some pro-active female editors who encouraged her. “There are people out there who are looking to publish women. You just need to be persistent and push.”

Louise reflected that, as a writer, she needs to “not take rejection so hard and just keep going”. A seemingly confident and polished public speaker, Louise admitted to being “incredibly nervous” about public speaking, and having done “lots and lots” of public speaking courses, as well as acting and singing classes, in order to feel comfortable performing in public. “At Sleepers, when we’re asking people to do events, we always have to ask two women for every one man,” she said. “You’ve got to start saying yes. And start pitching.”

Sophie said, “The men I’ve worked with – writers like James Bradley, a really fine writer and reviewer – would constantly pitch stuff at me.” She emphasised the effort she consciously put in to achieve gender balance at Meanjin and the importance of “as an editor, as a publisher, taking affirmative action really seriously. Doing the statistics.”

Louise held up a flyer she’d happened upon, for a series of seminars, running over the next few months, on VCE English texts. Of 15 set texts discussed, only two of these were by women. “These are kids going through school and this is what they’re reading,” she said. “And then we tell the girls that their voices are just as worthwhile.”

“I think it’s getting worse,” observed Sophie, pointing to the recent Triple J Hottest 100 furore as an example of the culture we currently inhabit. (For the first time ever, no female solo singers were featured in this list, put together from public votes.) And of course the panel all recalled the infamous “sausage-fest” all-male Miles Franklin shortlist of 2009.

I’ve done my own quick calculations (since the event) on how women have fared in general with the nation’s leading literary prize. Over the course of the Miles Franklin Award – which has run since 1957 – a woman has won 13 times. Three times this was Thea Astley; twice she shared the award (in 2000, with Kim Scott; and in 1963, with George Turner). The Miles has been awarded 50 times in all. Over the past decade (since 2001), two women have won, from the pool of 10 awards.

There’s much more to be discussed around this issue – and hopefully there will be further events and more public discussions. (For instance, on International Women’s Day, Melbourne’s The Wheeler Centre ran a terrific piece by novelist Kirsten Tranter on this very issue.) Perhaps, one year on, we should take another look at the statistics of women in print and see if anything has changed? 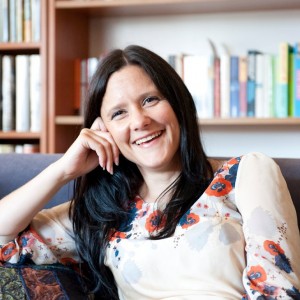 Jo Case’s first book, Boomer and Me: A Memoir of Motherhood and Asperger’s is published by Hardie Grant in Australia and the UK.