Revisiting Tomorrow When the War Began 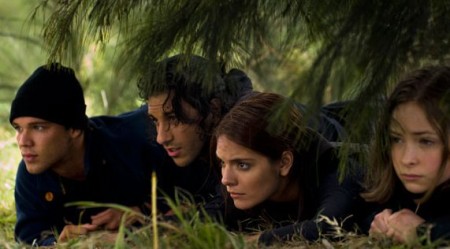 Perhaps it’s wrong to compare a film to a choc-top, but I have a reason. I’m not talking about your simple vanilla choc-top – this was a tiramisu choc-top. Hovering indecisively at the snack counter, I found myself thinking: ‘How did I not know about this? And do I really want to try it?’ Internal tos and fros about packaged desserts aren’t a usual habit of mine, but I mention them because these kinds of thoughts are pretty similar to how I felt about viewing the film adaptation of Tomorrow When the War Began. So. Do I really want small bits of sponge cake in my ice cream? And do I really want to see that Neighbours girl play Ellie, literary legend? No. Maybe? Anyway, I somehow found myself in the cinema, marvelling at how those bits of sponge weren’t soggy, but more anxious that I was about to ruin what is still one of my most adored reading experiences with a sub-standard film adaptation.

In the mid nineties, John Marsden’s Tomorrow series rocked my world and that of most kids around me. Like Harry Potter, just without the epic franchising. The story centres around Ellie Linton, played by Caitlin Stasey in the film, and a group of six other teenagers who emerge from a camping trip in a bush sinkhole, Hell, to find that their small town of Wirrawee, and entire country, has been taken over by a foreign power. Electricity is down, pets are dead, and the teens quickly realise that their families are being held prisoner at the town’s showground. Faced with the choice to return to Hell and hide out the occupation or fight back, they decide to wage their own guerrilla war on the occupying troops.

The film falls into the usual traps of a book adaptation. Mostly, the character development feels flimsy. In the book, the relationships between the characters are given more room, and each individual character transforms, whereas in the film this is mostly unrealised. Any tension between Ellie and Homer is hardly touched, and the chemistry between Ellie and Lee is stilted and a little cold. Having read the books, I could approach this film equipped with all the character dynamics that were only scratched at in the film. I can see how someone who hasn’t read the book might find the whole thing a little flat. As Jessica Au writes in her post at Spike, director Stuart Beattie is ‘aiming his debut squarely at the heart of a teenage audience’, which makes sense given the books are written for young-adults, but as Au then asks, perhaps ‘he could also have spared a thought for the kids who grew up with the novels as well?’ I agree, and I also think that even the YA audience won’t find what Au calls the film’s ‘painfully brick-like’ dialogue convincing – rather they’ll probably be more sensitive to the way it unsuccessfully attempts to mimic their vernacular.

The action elements, though, are given far better treatment. Take Ellie, when she’s ploughing a garbage truck down the main street being chased by horrifying spider-like dune buggies that become entangled in overhead powerlines. Yes, awesome! The plot, if it skips over much that develops in the book, is at least fast paced. And despite knowing exactly what was going to happen, having read the book, I still found myself crouched on the edge of my seat in suspense.

The acting is often awkward, but I blame the clumsy dialogue. The cast are given some ridiculously tough lines. In an early scene between Ellie and her best friend Corrie (Rachel Hurd-Wood), they talk about losing their virginity and wanting to have more, um, sex. It was so forced I felt like I should have looked away out of politeness. And I think we were all meant to ignore the strange accents a couple of the characters kept adopting. Are you talking with a British accent? No, Australian. No, you’re being British again. Ah well.

Unfortunately, the film had a few of these clunky sequences. Halfway through, there’s an unsubtle reference to film adaptations. Corrie sits reading My Brilliant Career, and chats with Ellie about books being better than their cinematic counterparts. Oh gawd. We get it – books are pretty much always better than the film. But if the director had an opinion on this he could have just let us know in a media interview. It just was a big unnecessary punctuation smack in the middle of the film. Tomorrow is Beattie’s directorial debut, and Marsden, having held off from any film adaptations until now, was impressed by Beattie’s script, offering only a handful of notes. A surprise really, given how cringe some of the dialogue is.

Despite all this, Stasey, as Ellie, who narrates the film, carries off her central role compellingly. A pivotal scene later in the film with the sensible and religious Robyn (Ashleigh Cummings) was brilliant and shocking. Deniz Akdeniz, who plays Homer, breaks up the tension well, and brings a convincing ease to his role.

I like how the film hasn’t shied away from the more horrifying events. There’s a scene where someone takes a bullet point blank – and it’s intense. But there are also plenty of instances of funny dialogue, and the setting, filmed around the Blue Mountains and Hunter Valley, is awe-inspiring.

There’s word that there’ll be a film trilogy now, after Tomorrow became the third-highest opener in Australian cinema ever. Despite its flaws, I really liked this film, and I’m excited because it’s a gutsy, action packed piece of Australian cinema. It might have suffered a little in page to screen translation, but the most important bit from the book, for me, is the defiant but vulnerable attributes of the characters, and the film has retained these. I got to feel the anticipation, the fear and the ‘What would I do in their place?’ all over again. You should still read the books, of course. And if you have read the book, but find yourself not liking the film, at least get a choc-top.

Belle Place is an editorial assistant at Affirm Press and writes for various monthly digital publications from Melbourne and Sydney.