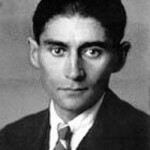 That notable blogonaut Angela Meyer holds a special place in my heart, for every so often she reminds her readers of one of her writerly guiding stars: Franz Kafka. He’s a fixture of my literary pantheon, too: I was perhaps 15 or 16 when I first immersed myself in those beautiful old Penguin Modern Classics. It’s possible that he’s been further forward in my consciousness this year, since I realised that my current age (41) was the last year of Kafka’s life … Food for thought, of course: where’s my Collected Works?!

And I’ve been reading (off and on) some great stuff about him: Reiner Stach’s marvellous biography, a projected three volumes with two now complete ( but just volume one in English so far) and a terrific collection of short essays published in Germany recently: Kafka’s Sentences edited by Hubert Spiegel – in which notable writers and academics each choose their favourite Kafka passage and reflect on it.

One of them recalled a real-life experience of mine earlier this year: that famous ending to The Judgement where the father exclaims: ‘you were truly an innocent child, but even more truly you were a devilish person! And therefore know this: I now sentence you to death by drowning!’ – and young Georg promptly heads off to the local bridge and jumps.

My experience earlier this year was to be 50 minutes into a job interview, only for one of the interviewing panel, who had until then sat askew  and said (as I recall) not a word, suddenly (seemingly) snapped and exclaimed: ‘But you are a nobody!’

I think for the remainder of the discussion I floundered about rather like Josef K. before the Law – there is no comeback after all from that sort of Judgement, even if my resume included 20 or so references from the cream of the Australian publishing and writing communities. And funnily enough, afterwards I crossed Swanston Street Bridge on my return home!

But no, jumping off the bridge didn’t cross my mind then, and ever since it’s been quite the most empowering experience really: it is how you constitute yourself that is the only thing that ever really matters.

The other way Kafka intersected with me lately was this lovely sketch from the diaries concerning a book reading, which I encountered in the aforementioned book of favourite Kafka passages. Revealing (yet again) Kafka’s irrepressible comic talent, it’s a nice reminder that the literary scene hasn’t changed much over the last 100 years! I dedicate it to Angela, for the next time she’s at a reading, and really wishes she was someplace else:

‘Some unpublished things from my pen,’ he began.

Apparently a kind person, an almost grey brush of hair, painstakingly close-shaven, a sharp nose, the flesh over his cheekbones often ebbs and flows like a wave. He is a mediocre writer with good passages (a man goes out into the corridor, coughs, and looks around to see if anyone is there), also an honest man who wants to read what he promised, but the audience wouldn’t let him; because of the fright caused by the first story about a hospital for mental disorders, because of the boring manner of the reading, the people, despite the story’s cheap suspense, kept leaving one by one with as much zeal as if someone were reading next door.

When, after the first third of the story, he drank a little mineral water, a whole crowd of people left. He was frightened. ‘It is almost finished,’ he lied outright.

When he was finished everyone stood up, there was some applause that sounded as though there were one person in the midst of all the people standing up who had remained seated and was clapping by himself.  But Kellermann still wanted to read on, another story, perhaps even several.  But all he could do against the departing tide was to open his mouth. Finally, after he had taken counsel, he said, ‘I should still like very much to read a little tale that will take only fifteen minutes. I will pause for five minutes.’

Several still remained, whereupon he read a tale containing passages that were justification for anyone to run out from the farthest point of the hall right through the middle of and over the whole audience.

* apparently a reasonably well-known (and certainly better selling than Kafka!) Prague author of the time.

Note: I found the translation through a link on Wikepedia, incidentally – not sure whose it is. I daresay there’s a better one available somewhere. (I took the liberty of paragraphing it too incidentally).